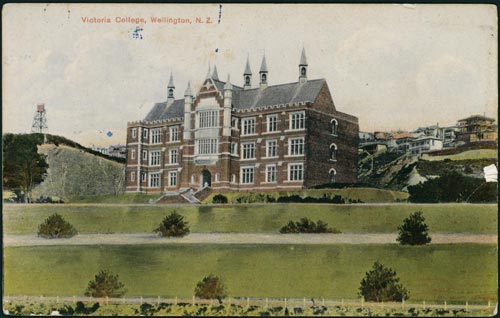 Wellington was the last of New Zealand’s major cities to build a university. Established in 1897, and named after Britain’s reigning monarch, Victoria College was initially a night school. In 1906 it moved into a new building in Kelburn, shown here around 1908. As the university grew, new wings were added. In 1959 the structure was named the Hunter Building, after Thomas Hunter, an early professor. In 1974 it was declared an earthquake hazard and plans were made to demolish it. Supporters protested, and convinced the university to keep it. It was strengthened and is now the university’s administrative centre.