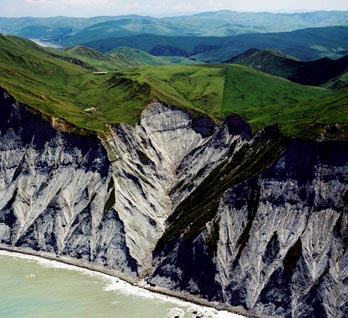 New Zealand is part of a mostly submerged continent that broke away from the Gondwana supercontinent millions of years ago. As the new land moved into the Pacific Ocean, it gradually submerged, then was uplifted by activity in the earth’s crust. New Zealand’s geology records the story of the country’s birth and growth.

Subduction beneath the North Island

New Zealand in the Pacific Ocean

New Zealand is part of a continent called Zealandia, most of which is under the ocean. The country lies across two moving plates – segments of the earth’s crust. As these plates collide, rocks are being pushed up, creating hills and mountains, including the Southern Alps.

Most of the South Island is made of a rock known as greywacke. It contains fossils that show that the island was once under the sea. In the west and south, the rocks have been transformed to a rock called schist, by heat and pressure.

Greywacke also forms most of the North Island, although much of it is covered by layers of newer rock, such as volcanic rock.

These rocks provide clues to New Zealand’s ancient past.

About 540 million years ago, New Zealand was being formed on the eastern edge of the supercontinent Gondwana. Over millions of years, rivers carried sediments to the sea, and offshore volcanoes deposited ash on the sea floor. The sediment and ash were buried, and hardened into the rocks now underlying most of New Zealand. Several times the rocks were raised to form mountains on the Gondwana coast.

About 100 million years ago hot rock began to well up beneath Gondwana. This caused volcanic eruptions, and large cracks (faults) opened up. By 85 million years ago a large section (Zealandia) broke off and moved into the Pacific Ocean. As Zealandia moved away from Australia, much of it sank beneath the sea.

About 25 million years ago Zealandia began to split apart. Still mostly under the sea, it now lay at the junction of the Australian and Pacific plates. Close to the plate boundary, part of the sunken continent was pushed up, creating the land area of New Zealand.

In the last 1.8 million years, huge changes have created the landscape of today. The Southern Alps have risen thousands of metres and volcanoes have violently erupted. In the ice ages, glaciers moved rock and carved out lake basins and valleys.