Kōrero: Human effects on the environment 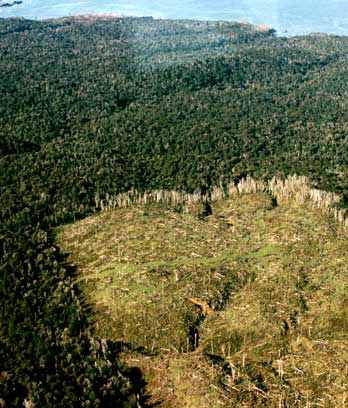 Isolated for millions of years, New Zealand’s plants and animals were very vulnerable to the impact of humans. When the ancestors of Māori arrived around 1250–1300 AD, bringing rats and dogs, they started a wave of extinctions that continues today.

New Zealand’s plants and animals evolved for millions of years without human or mammal predators, so they were very vulnerable when people and other predators arrived. For example, many native birds cannot fly, and were easily caught on the ground.

The ancestors of Māori came to New Zealand around 1250–1300 AD, bringing with them the kiore (Pacific rat) and kurī (dog). Bones found by archaeologists show that Māori first hunted the largest animals – moa, geese, takahē, sea lions and fur seals. Most of the larger birds became extinct within a few hundred years, and Māori ate shellfish, fish, eels and plants instead.

Before people arrived, more than 80% of New Zealand was covered in forest. Māori burnt about 40% of the forest within 200 years of arriving – probably to clear space for gardens, tracks and settlements.

Large numbers of Europeans settled in New Zealand after 1840. They cleared much of the remaining lowland forest for farming, and cut down many more large trees for timber. Today less than a quarter of New Zealand is covered in forest. Cleared land in hilly areas is prone to erosion.

Europeans also drained swamps and other wetlands so they could farm the land – by the 2000s only 10% of the original wetlands remained.

Sealers and whalers hunted seals, sea lions and whales from the 1790s to around 1850, killing huge numbers.

Over 30,000 exotic plant species have been brought into New Zealand. Some have become uncontrollable weeds, replacing native plants in certain areas. Weeds include gorse, contorta pine, marram grass and hawkweeds.

Europeans brought more mammals to New Zealand. Eleven species (including rats, cats, stoats and ferrets) now live in the wild, and have killed many native animals. Forty out of 91 native land birds have become extinct, and many more are in danger. Grazing animals such as goats, deer and possums also live in the forests and damage the trees.