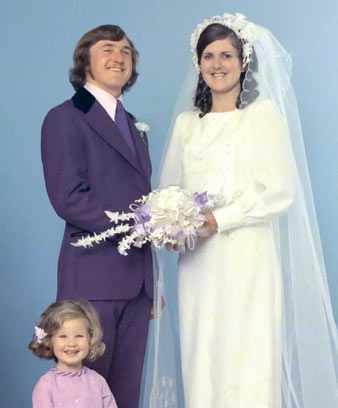 In the 19th century marriage was seen as the foundation of society, with each partner’s role set by law and custom. In the 21st century many couples choose instead to live together without being married, or they can have a civil union. Nevertheless, marriage and weddings remain important to many, and in 2013 same-sex marriage became legal.

In traditional Māori society marriage partners were generally from the same iwi or hapū . Marriages were often arranged. There was no particular marriage ceremony, but gifts were sometimes given.

Traditional marriage continued among many Māori until around the 1950s, when a law change meant that parents needed to be married in a Pākeha way for their children to inherit their property.

Marriage in the 19th century

British settlers brought English marriage laws and ideas about marriage to New Zealand. Marriage and family was seen as the basis of society, encouraging social stability and moral behaviour.

When a couple married, the husband legally owned all property and was required to financially support his wife and children. Wives were expected to have and bring up children, and run the household.

People tended to marry those from similar backgrounds. There were fewer women in colonial society, and so more men remained unmarried. Many people remarried if their husband or wife died.

Married people had rights that other people didn’t have. For example, unmarried mothers were not entitled to the government family benefit. But over time these legal advantages reduced.

The marriage rate climbed both before and after the two world wars, reaching a record high in 1946. Some soldiers serving overseas married women they met there, and during the Second World War many New Zealand women married US soldiers who were posted here.

Marriage and living together from the 1970s

From the 1970s it became more common for couples to live together and have children outside of marriage. Gay and lesbian couples became more accepted. In 2005 civil unions were introduced, and in 2013 same-sex marriage became legal.

Weddings are when a couple begins and celebrates their marriage. Traditionally they were paid for by the bride’s family, but in the 21st century the couple are likely to pay for some or all of the costs.

Before weddings the groom often has a ‘stag party’ and the bride has a ‘hens’ night’ with their friends of the same sex. Since the early 20th century it has been usual for the couple to go on a honeymoon holiday after the wedding.