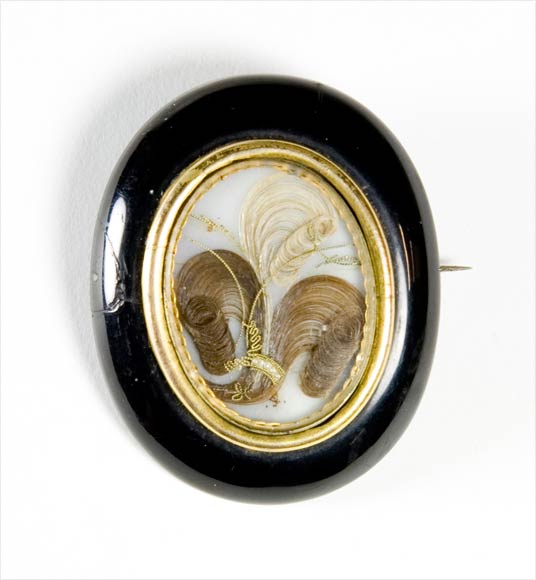 Wearing mourning jewellery was one way to mark the death of a loved one. While the first examples of mourning jewellery in Europe date from the 15th century, it became fashionable in England after the death of Queen Victoria's husband, Prince Albert. Victoria wore black for the rest of her life and everyone in her court had to wear mourning garments for several years. This mourning brooch was brought to New Zealand in the late 19th century. Like many pieces of mourning jewellery, it includes a small piece of human hair. During the late 19th and early 20th centuries there were elaborate rules about what mourners should and should not wear after a death. Widows frequently wore black for long periods of time and men wore black armbands to indicate a recent bereavement.

Holy communion on the battlefield, 1917

What a beautiful brooch. We

What a beautiful brooch. We have many lovely ones at Auckland Museum also :) along with hair bracelets and some are displayed in the 1866 street gallery on the second floor in the 'Jeweller's' shop window. If anyone is interested in 'mourning art and jewelery' I suggest obtaining the book of the same name by Maureen DeLorme. It is brilliant. Cheers Sarndra