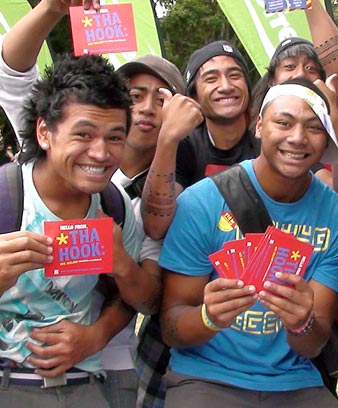 Pacific people are important contributors to New Zealand society, and to the arts, sport and music industries – yet in the 21st century their health status was poor. Pacific people had high rates of diabetes and infant mortality, and many lived in overcrowded conditions in which infections spread easily. A number of targeted health initiatives aimed to combat these problems.

Avoidable deaths by ethnicity and age

Pacific and total population by age group and sex, 2013

In 2013 Pacific people were 7.4% of New Zealand’s population. They made important contributions to society, but their health outcomes were often poor. Many of these problems were due to socio-economic factors such as high unemployment, low income and overcrowding in low-quality accommodation.

Pacific people had a high fertility rate – in 2013, nearly three births per woman, compared to about two per woman for New Zealand as a whole. Pacific women also tended to have children young, and the Pacific teenage pregnancy rate was high.

Pacific people had a higher death rate and a lower life expectancy than the New Zealand average.

The Pacific infant mortality rate was 40% above the national average. Pacific children were more likely to be hospitalised with respiratory conditions, infectious and parasitic diseases, burns and unintentional injuries. There is recent evidence of improvements in Pacific child health indicators overall, except for conditions such as oral health and childhood obesity.

Pacific people tended to have lower incomes than other New Zealanders, and were more likely to be unemployed. Because of lack of money, they sometimes held off going to the doctor until they were very sick. Pacific people were also more likely to live in overcrowded, poor-quality housing, which encouraged disease to spread. Traditional attitudes to health and illness can also be important factors in poor health among Pacific people.

Pacific people were likely to suffer from chronic conditions such as heart disease and diabetes, which could be caused by:

Pacific people were more often admitted to hospital for preventable conditions such as asthma and diabetes than the general population. This was probably because of delays in seeking medical treatment, difficulty in accessing doctors, and lack of confidence in health services. Some medical services focused on the health needs of Pacific people had been set up.