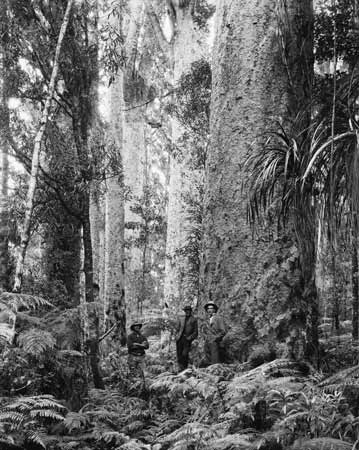 Three men admire the grove of trees known as ‘the cathedral’ in Trounson Kauri Park in the early 20th century. At this time, the timber industry had felled much of the kauri forest in Northland, but some people wanted to preserve scenic remnants. In the 1890s, a 3.34-hectare stand of kauri 36 kilometres north-west of Dargaville was reserved by the government. Sawmiller James Trounson added a further 22 hectares, and later sold the government another 364 hectares. Trounson Kauri Park was opened in 1921. It is now run as a ‘mainland island’ by the Department of Conservation, and an intensive predator control programme is helping to restore its ecosystem.