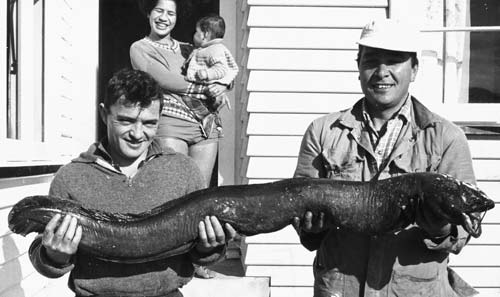 Rangi Goodman (left) and Don Edwards hold a monster eel. It was caught by their friend Warren Kennedy, from the Wainuiomata River in June 1965. Weighing 16 kilograms, and 1.68 metres long, it had a girth of 81 centimetres. While eeling, Mr Kennedy had noticed what he thought was a log, and moved aside. But when the ‘log’ followed he realised what it was, and speared it. The largest recorded longfin eel weighed in at 24 kilograms.

In the early 1950s my father,one of my uncles and I used to go eeling and fishing at least once a week to various places near Christchurch, ie Waimakariri River, Lyttelton, to name just a couple. On One ocassion we went fishing at night to Lyttelton Harbour on the rocks (where Cashin Quay now is). We threw in a line with a grouper hook attached and about 20 minutes later my father noticed there was something on it. On pulling the line in, which it took both my uncle &amp; father to do, up comes this huge conger eel, which they killed with an old WW2 bayonet. On measuring it they found it to be 6 feet 6 3/4ins in length and as round as a small saucer. Some of it was smoked, some fried, and some was pickled &amp; jarred for later use. If I remember correctly that eel lasted us for about two months, and was to my mind at least the best eel I've ever eaten. Sadly it was the only time we ever caught an eel of this type. I might add that I am a Pakeha and so were both my parents and my uncle. I am now 71 years old and the last time I had a decent feed of eel would have been in the early 70s.