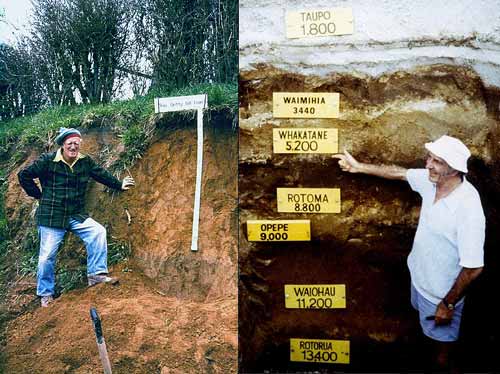 In the 1950s and 1960s Alan Pullar (left) and Colin Vucetich worked for the DSIR Soil Bureau, mapping soils in the North Island. Vucetich worked around Rotorua, and Pullar in Gisborne and Whakatāne. They recognised that the soils were formed on volcanic ash layers, which were often visible in road cuttings. The men started tracing out distinctive ash layers across the region. Work on ash layers (later called tephrostratigraphy) was outside official Soil Bureau policy, and was banned. Much of their work was therefore done in weekends and holidays on what they called ‘secret correlation missions’.

Between 1963 and 1975 Vucetich and Pullar published a series of papers on the sequence and characteristics of the main volcanic eruptions in the Taupō and Rotorua region. This work has been the foundation for later volcanological studies as well as the understanding of soil properties.