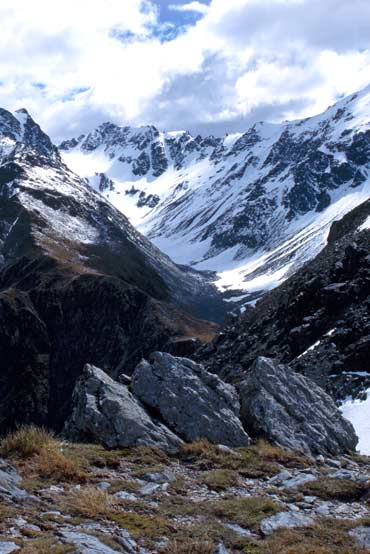 Browning Pass lies between the Wilberforce and Arahura rivers in the Canterbury/West Coast high country. It was a common climbing and tramping area for John Pascoe, perhaps the greatest of New Zealand’s mountain writers. He spent an ‘alpine honeymoon’ with his wife Dorothy there in 1940, and later wrote an account of the use of Browning Pass by both Māori and European as a route between Canterbury and the West Coast. Pascoe’s most important mountain book was Unclimbed New Zealand (1939), which described his ascents of many peaks in this part of the Southern Alps. His work was rather different from that of many other mountaineering writers – the tone was colloquial and honest, rather than heroic. The book includes an account of his successful first ascent of Mt Evans.