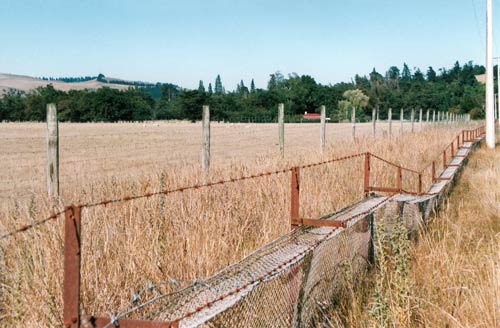 In the late 19th century, many hundreds of kilometres of rabbit fencing were built in regions from Hawke’s Bay to Otago, attempting to prevent the spread of rabbits. The fence had to be high enough to control cattle. On the side where rabbits were prevalent, netting was buried in the soil to prevent the animals burrowing underneath. This one also has a strip of netting that forms an overhanging verandah about a metre high to stop rabbits jumping over. Rabbit fences needed regular maintenance, so it is not surprising that they were only partly successful on rough terrain.