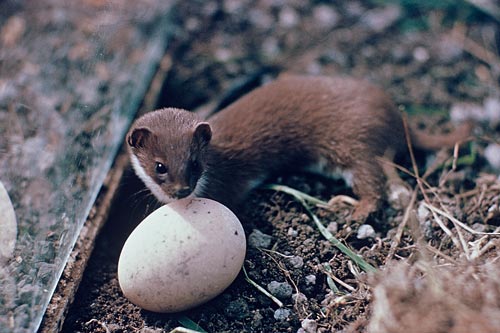 This poem by G. B. Starky, a North Canterbury farmer, is a wry take on the debate that raged in parts of the South Island over the introduction of weasels, ferrets and stoats to control rabbits. The line ‘The remedy is worse than the disease’ was a common complaint voiced in newspapers at the time.

The Squatter and the Cockatoo were walking hand in hand, And the Squatter saw the rabbits were encroaching on his land; He said, ‘My gentle Cockatoo, let’s band together, pray, And make things hot for this great lot of conies here at play.’

The Cocky, unsuspecting elf, agreed to wire in, And went for bunny with a dog, with deadly gun and gin; He slew the rabbits near and far, he slew them low and high, Until at last there was not one to make a rabbit pie,

The Squatter went destroying in a different way to Cocky, He said, ‘My land is rough in parts and very steep and rocky, I’ll breed ferrets there at vast expense, buy cats at one-and-six, For I think their ‘natural enemies’ should know the rabbit tricks.’

He turned out pussies by the score, and ferrets, weasels, stoats; He kept a hundred rabbiters, and phosphorised his oats! He put up net of half-inch mesh and sunk it in the ground; And the rabbit said, ‘If I mayn’t dig, why I must o’er it bound.’

The Weasel came along with him, he left those mountains rocky, And came and took up his abode with our old friend the Cocky; He killed the goodwife’s capons rare, her turkeys, ducks, and geese, ‘The remedy,’ the Cocky cried, ‘is worse than the disease.’