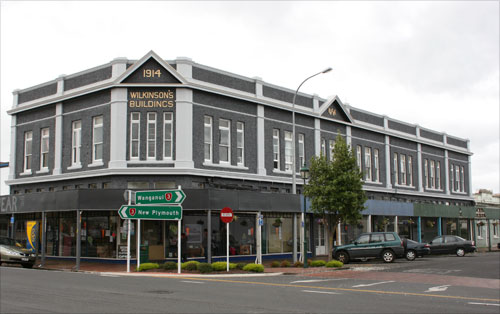 Located on Eltham’s central intersection, Wilkinson Building was opened in 1914. The innovative reinforced-concrete structure was designed by Hāwera architect John Duffill for Charles Wilkinson, Eltham’s foremost businessman and politician. Wilkinson came to the town in 1884 to manage a store for the merchant Chew Chong. He soon established his own shop and became a major player in the cocksfoot seed industry. For 22 years he was a member of Parliament, first representing the Reform Party and then as an independent; he nearly became the first leader of the National Party in 1936. From 1941 to 1947 Wilkinson was mayor of Eltham, retiring from Parliament in 1943.