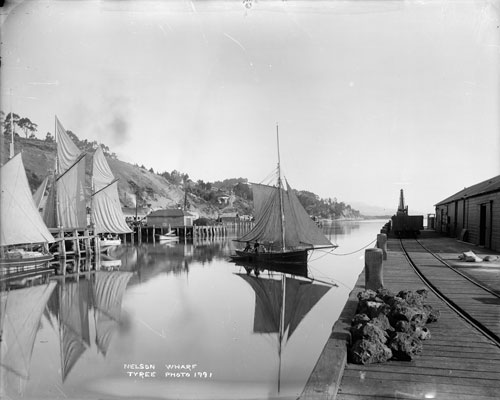 These small sailing craft were photographed in the 1890s at Nelson wharf. The double-masted vessel at centre left is the 49-foot Comet, built by J.J. Ricketts at Torrent Bay in 1883. Most of Nelson's fleet of small seagoing craft were cutters or schooners of between one and 20 tons, which were dubbed ‘Blind Bay [Tasman Bay] hookers’. Many were built locally in bays where there was available timber. The term 'hooker' originated from the Dutch hoeker, a two-masted fishing vessel that fished with hook and line. Over time the name became a derisive, yet still affectionate, general English term for these small sailing vessels. Hookers were ideal for serving the many shallow coastal ports and wharves in Tasman and Golden bays. The pile of rocks in the foreground is likely to be ballast that a hooker has swapped for cargo.