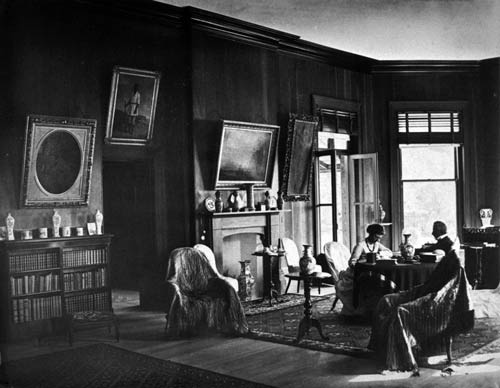 Sir George Grey, twice New Zealand’s governor in the mid-19th century, and premier in the 1870s, separated from his wife, Eliza (née Spencer), in 1861, after a period living in South Africa. Eliza Grey believed her husband was having affairs. While the couple were travelling between England and South Africa, Grey learnt that Eliza had fallen in love with another man on board the ship, and had her put ashore in Rio de Janeiro. Grey adopted his niece, Anne Thorne George, who became his companion, ran his household, and helped host social gatherings. They are shown here in the drawing room at Grey’s home on Kawau Island, about 1870. Grey and his wife were reconciled in 1897, 36 years after separating. Both died the following year.

Grounds for divorce over time