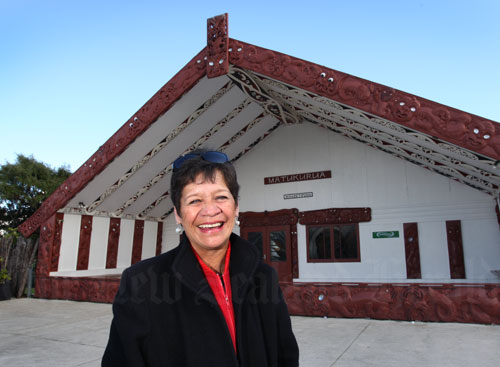 Death from degenerative diseases such as cancer and heart conditions became increasingly common as people lived longer. Linda Currin, shown here at the 2010 launch of The Sooner the Better campaign, survived stomach and lung cancer. The campaign aimed to encourage early checking of persistent coughs, chest pain and recurrent chest infection (all early symptoms of lung cancer). Surviving cancer made Currin a rarity – the survival rate among Māori in the Auckland and Northland areas was only 10% because of late detection of disease.

Well, it is now 2015 and I,m still here!!! The past 4 Winters and spring haven,t been the best for me re: pleuresy and pneumonia and many rounds of antibiotics. In July last year I was admitted into NSH to have IV antib's as last round of pills (which I had finished 3 days beforehand) didn't work and I just couldn't seem to put weight on - 38kgs. In November I went for yet another CT Scan ( the previous 2 showed a lot of scarring and even a spot on my good lung ). Then two weeks later, I went to see my Lung Specialist to get the results. Everything was great, the best news I could have had and I had even managed to reach a healthy weight of 50kgs (for me that is). It was the best Xmas ever in 10 very long years for my sons, daughters-in-law and all my mokos. A couple of days before NY's I started to ache near the rib cage and phlegm wasn't the best so I took myself off to my local GP and she put me on more antib's and then told me that there was no sign of pleuresy or pneumonia. I had shingles which I'd never heard of and had thought my cats fleas had bitten me!! I was given horse sized anti-viral tablets and for the next week, I was in bed by 5.30pm. I missed NY's eve, most of January 1st and the next few days after. I don't have to go back to NSH till December this year and that will be for a routine checkup. So, just letting you know how things are with me....Sorry, I don't know how to find my Email or where to find it so it doesn't get used.