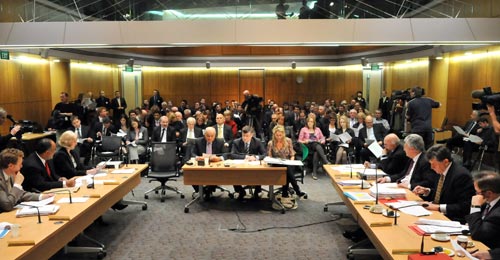 Parliament's Privileges Committee investigates allegations that members of the House of Representatives have acted improperly or taken advantage of the special rights and exemptions from general law known as parliamentary privilege. Here the committee hears evidence from billionaire Owen Glenn (seated on the left at the centre table) in 2008. Glenn made large donations to the New Zealand First and Labour parties, both of which failed to declare them despite being legally required to do so. In addition, New Zealand First leader Winston Peters categorically denied having received money from Glenn. The committee's investigation found otherwise.