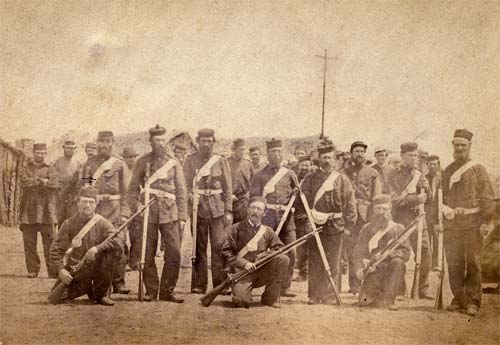 The Taranaki Military Settlers, formed during the wars of the 1860s, were a volunteer force recruited partly from the Australian and New Zealand goldfields. In return for carrying out policing duties, they were given farms on land confiscated from local Māori. These officers and men pose with weapons at their redoubt (fortified camp) at Pukearuhe, on the coast north of New Plymouth. The Taranaki Military Settlers were disbanded in 1867. Two years later the lieutenant in charge, his family and three others (including the local missionary) were killed by a Ngāti Maniapoto raiding party.