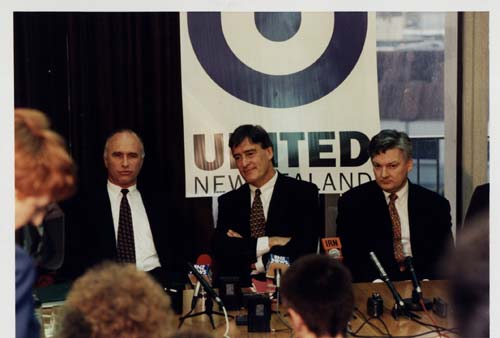 The United New Zealand Party is shown here on 28 June 1995, the day its formation was announced. It included MPs from both Labour and National (then in government). From left are Bruce Cliffe (who resigned from the National cabinet), Clive Matthewson (a Labour frontbencher), and Peter Dunne (ex-Labour, who had earlier formed the Future New Zealand party). Other UNZ MPs were Margaret Austin (Labour), Pauline Gardiner, Peter Hilt and John Robertson (all National). The formation of United New Zealand was prompted by the introduction of the mixed-member proportional (MMP) electoral system, and the resulting reduction in the number of electorate seats. These MPs, uncertain the party they called home would find them winnable seats, jumped ship. A number of others also did so, and for some years in the 1990s and early 2000s party membership within Parliament was more mobile than it had been since the early 20th century.