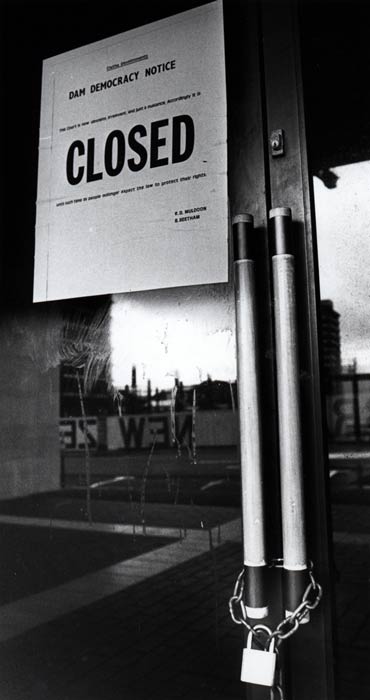 When the National government of Robert Muldoon ignored local concerns and a legal decision against the granting of water rights, and passed the Clutha Development (Clyde Dam) Empowering Act in 1982, protesters made their feelings known by padlocking the doors of the Court of Appeal in Wellington and the High Court in Christchurch. They also stuck a notice on the door of each court that read 'This Court is now obsolete, irrelevant, and just a nuisance. Accordingly it is CLOSED until such time as people no longer expect the law to protect their rights'. This was 'signed' by Muldoon and Social Credit leader Bruce Beetham, who had supported the legislation. It was one case where people clearly felt that the government had acted as if it was above the law. Partly in response to this discontent, the next Labour government, elected in 1984, passed the Environment Act 1986. This established the Office of the Parliamentary Commissioner for the Environment, with powers to investigate any state decisions that might adversely affect the environment.