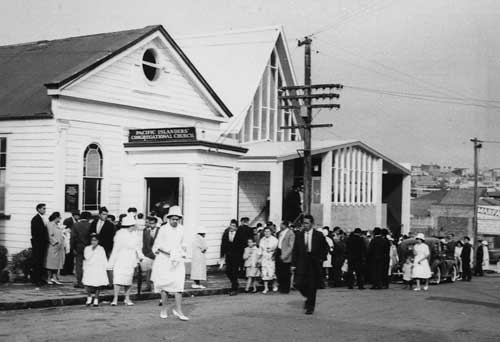 Churches have long been important centres for Samoan life and identity in New Zealand. The first ethnic Pacific Island church was the Newton Pacific Islanders Congregational Church (PICC), founded in Auckland in 1947. This 1960s photograph of the church was taken from Edinburgh St, off Karangahape Rd. The original wooden church building is on the left. In 1979 this building was demolished and replaced by a two-storey halls complex (Elisi and Fisher halls), at a cost of $600,000. To the left of this (out of the photograph) was the original minister’s manse, which was later renovated to become the two-storey administration and Sunday school complex called Challis House. On the right is a new concrete church building erected in 1962.

Isn't the Church ( Newton PIC) originally found by Cook Islands ?? My family (the founders) and members today who still goes there are the founders of this church. Not Samoans. It wasn't a couple years time when after the church was built and taken notice other pacific islanders asked if the church could be used for Pacific Islanders.

hey xx this is kool

hey xx this is kool