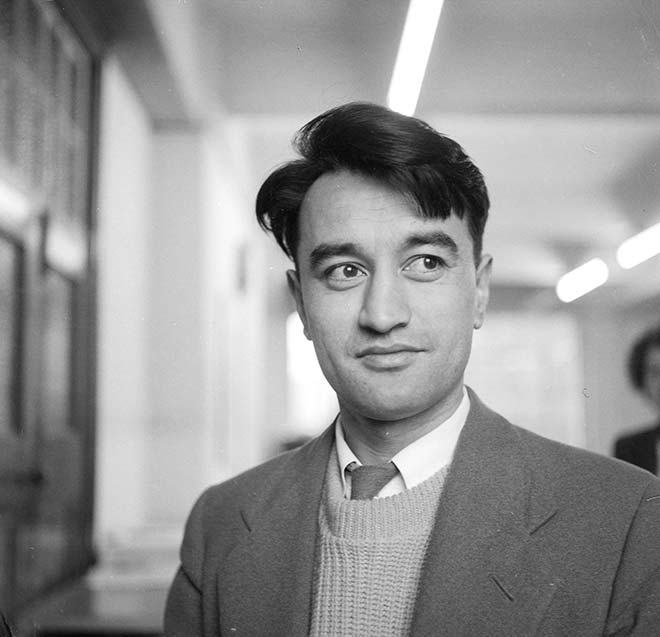 In the 1950s, when this photo was taken, Alistair Campbell was a young poet who was part of the 'Wellington Group' which included Louis Johnson, James K. Baxter, Peter Bland and, later, Fleur Adcock, who Campbell married in 1952. The group were critical of Allen Curnow's emphasis on nationalism in poetry, and at the time Campbell explored international influences. Later in life he rediscovered his Cook Islands and Polynesian roots and wrote poems reflective of those cultures. He was always a skilled love poet and towards the end of his life he published a book, It's love, isn't it? (2008), with his second wife, Meg, which collected together their love poems. This is one, 'Why don't you talk to me?':

Why do I post my love letters
in a hollow log?
Why put my lips to a knothole in a tree
and whisper your name?

The spiders spread their nets
and catch the sun,
and by my foot in the dry grass
ants rebuild a broken city.
Butterflies pair in the wind,
and the yellow bee,
his holsters packed with bread,
rides the blue air like a drunken cowboy.

More and more I find myself
talking to the sea.
I am alone with my footsteps.
I watch the tide recede
and I am left with miles of shining sand.

Why don't you talk to me?