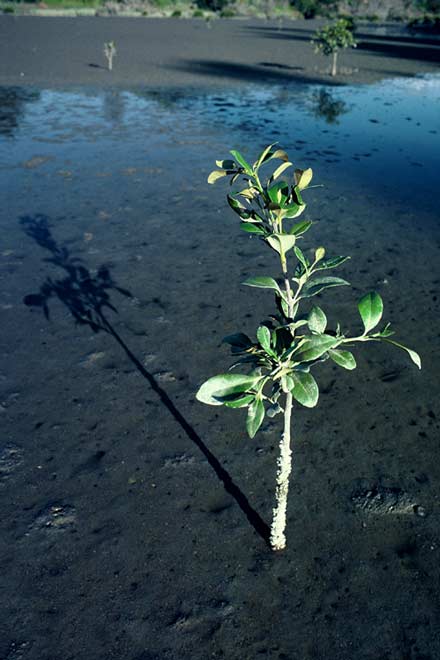 Mangrove seedlings grow quickly on open mud away from the shading influence of adult plants. The sole representative of mangroves in New Zealand is Avicennia marina or mānawa, found in the frost-free harbours and estuaries of the northern North Island. In recent times mangrove swamps have started spreading within some estuaries and harbours. Local residents have voiced concerns about this and a debate has developed. There is no argument about why mangroves are able to expand: increased sediment is arriving in estuaries and harbours from adjoining lands. The debate is about the values people attach to mangroves on their patch of coast. On one side are the environmentalists who stress the benefits of mangroves, which include keeping coastal waters clear of sediment and contaminants, and providing a rich habitat for an assortment of plants, animals and birds.

On the other side are those residents who want to reclaim their waterways and beaches. Their concerns centre around the loss of amenities and recreational spaces – including reduced access to the coast, poorer fishing and shellfish gathering, an unpleasant mud odour, and the loss of sandy beaches.

Tauranga District Council decided to take a ‘line in the mud’ approach to managing the mangrove expansion. It permits removal of young mangroves seaward of their 2002 position. However, environmentalists lodged an appeal in the Environment Court against mangrove removal in Tauranga Harbour and a local catchment care group appealed because it felt that the line in the mud should be much closer to the shore.

Until there is better control of silt run-off from surrounding lands, mangroves will spread and the debate will continue.