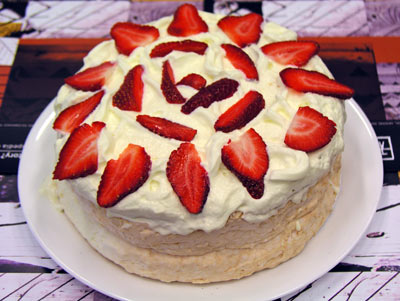 The pavlova is an Australian or New Zealand dessert, a single-layered meringue cake with a crisp crust and soft, marshmallow centre, topped with whipped cream and fruit. The confection was popularised when the Russian ballerina Anna Pavlova toured Australasia in 1925. Whether the final perfecting and naming of the cake was the achievement of Australians or New Zealanders is a matter of national rivalry. One explanation of the pavlova’s origins is that a West Australian chef found a recipe in a New Zealand women’s magazine and adapted it – an explanation which happily gives each country its own piece of the cake.

From Italy via Australia

How to make a pav