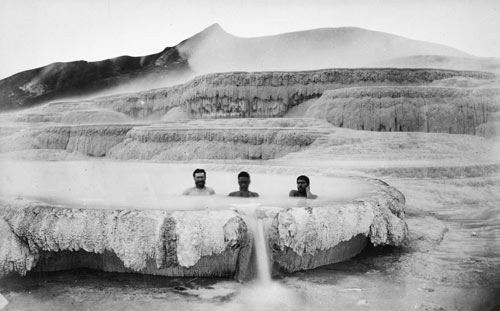 Before the eruption of Mt Tarawera in 1886, the Pink and White Terraces at Rotomahana were a spectacular tourist attraction. The terraces had natural silica basins in which you could bathe. When English novelist Anthony Trollope sampled one of the pools in the early 1870s he wrote, ‘The baths are … like vast open shells, the walls of which are concave, and the lips ornamented in a thousand forms … I have never heard of other bathing like this in the world.’ Here, three men (a Pākehā and two Māori) share a bath at the White Terrace, about 1880. Racially mixed bathing was unusual in the late 19th century.