Fear on a calm day 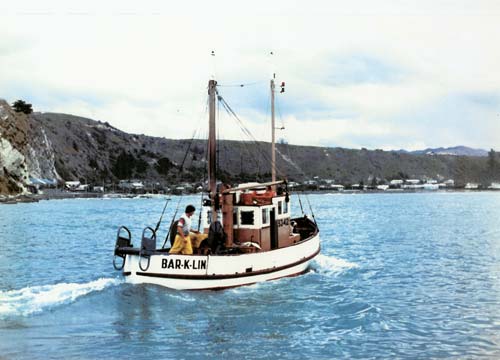 In June 1998 retired fisherman A. R. Gibb read an article about underwater sand avalanches in the Kaikōura Canyon. It triggered memories of a most unusual event at sea in 1953, when he and a friend were returning from a fishing trip. So he sent this account to the author of the article, marine geologist Keith Lewis:

We were about 15 miles (24 kilometres) south of the Kaikōura Peninsula about mid-afternoon. It was a perfect day, just the usual gentle ocean swell and the lightest nor-easterly. We were steaming north towards the Kaikōura Peninsula and three to four miles [6 kilometres] off Goose Bay. My mate had gone below to have a snooze on the bunk. I was in the wheelhouse at the wheel. Our launch the Bar-K-Lin was only two years old, a solid 38-footer [11.6 metres]. I noticed a little jobble on the water ahead of us. I hardly took any notice, thinking it was what is commonly known among Kaikōura fishermen when an up current tide meets a down current tide, which often causes a jobbly disturbance where the tides meet. But as I got closer the waves got bigger and steeper. I had never seen such a phenomenon on a calm sunny day – in a storm yes, but this was unbelievable.

I didn’t have to call my mate, the pitching of the boat made him realise something unusual was happening. In a matter of minutes we were in those high steep waves – going up to the top of one we would be looking straight up into the sky, then down we would go bow first, then up again. If we had broached on one of these waves, we would have rolled completely over, that was our greatest fear …

It was obvious there was no wind whatsoever to cause these waves. They were even worse than a sea affected by storm as the waves were closer together and very, very steep. We were very frightened, and all that we could think was that it was an earthquake which had caused a tidal wave, and we would be lucky to survive.

And then, after about fifteen or twenty waves they began to subside. We were in calm seas again, and much relieved souls.

I strongly suspect that what you saw was the surface effect of a submarine avalanche … just a few million cubic metres (i.e. just a small one) of sand and mud that collapsed on the steep canyon wall and roared down the canyon (1 kilometre deep) at the speed of an express train (when we had them). Because the seabed drops, it produces a drop in the sea surface above and this bounces back causing big waves. If a few hundred million cubic metres had gone you probably wouldn’t have been around to tell your story – nor, most probably would anyone that happened to be on the beach perhaps as far south as Christchurch (the wave gets amplified on a gently shoaling shelf).