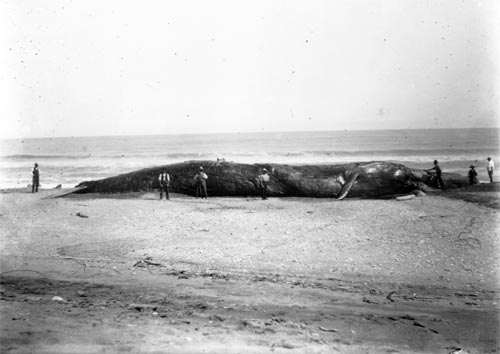 When Edgar Waite, then curator of Canterbury Museum, opened his morning paper on 17 February 1908 one article caught his attention:

‘A large whale, measuring 99 ft long, and 20 ft wide, and so high that a man on horseback cannot see over it, has been washed ashore at Commissioner’s Point, six miles north of Okarito, near Hokitika. Viewed from a distance it has the appearance of a stranded dismasted vessel.’

A zoologist, Waite recognised the significance of the find and immediately began efforts to procure the whale skeleton. He spent months bargaining and made the long trip to Ōkārito, over the Southern Alps, with the museum’s taxidermist, William Sparkes. Ultimately, the whale skeleton was purchased by Edgar Stead, ornithologist, supporter and associate of Canterbury Museum.

It was Stead, accompanied by three other men, who took on the mammoth task of freeing the skeleton from its beached position, cleaning the bones and transporting them to Christchurch. They used shovels, a chain block, picks, a gantry and hay knives, and suffered the stench of rotting whale flesh, whale oil and sandflies.

‘At the end of the twelfth consecutive day’s work, favoured by fine weather and calm seas, we reached the base of the skull. During our evenings in camp our discussions had been largely about the difficulties we might expect to meet in the handling of this huge bone. Ten feet in width, eleven in length and four and a half in depth, the whole mass must have weighed something about two tons. Before starting work on clearing away the large folds of flesh from it, we threw up a good sea wall all around the sea-side of our pit.’

The whole job took a total of four weeks. Stead then offered to sell the whale skeleton to the museum for £500. The museum could only commit £200, so a public subscription was taken up to raise the balance.

‘[W]e consider it would be not only a national loss, but an absolute disgrace to us if the skeleton were allowed to find a resting place elsewhere,’ Edgar Waite wrote in a fundraising circular. ‘Already disquieting enquiries have been made from America, a country whose propensity for acquiring “big” things is proverbial.’

Waite’s claim that the blue whale he was trying to procure was ‘the largest creature which ever inhabited the earth or ocean’ was vindicated by other museums around the world.

The whale skeleton was transported by ferry, rail and horse-drawn wagons and arrived at the museum on 15 October 1908. The fundraising target was reached on 28 October. The skeleton went on display in a purpose-built open shelter on 28 March 1909, and large numbers of Cantabrians came to marvel at ‘their whale’.

It is still the largest blue whale skeleton held in a museum collection. In recent years the skeleton has been removed from public view while a major conservation project has taken place. Time and exposure to the elements had taken their toll. Conservation treatment is now complete and the skeleton will take pride of place in the museum’s new atrium.