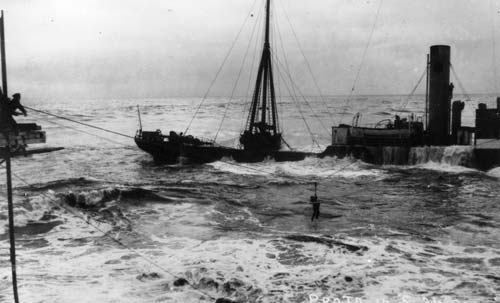 Another West Coast harbour with a dangerous river bar was Greymouth. This shows the Hawea soon after she ran aground at the entrance to the Grey River at 1.30 p.m. on 30 October 1908. There was a heavy swell, and the crew was in imminent danger of being swept overboard. A line was cast on board by rocket and, as shown in this photo, the crew were brought ashore one at a time. The last man landed at 4.15 p.m., and soon after the Hawea broke up.