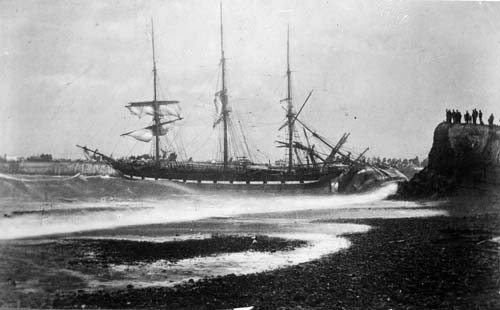 This photograph shows the Ben Venue and City of Perth after they broke loose from their moorings. Timaru and Ōamaru ports were both on exposed beaches. They provided little protection from large southerly swells. On 14 May 1882 big seas began to run at Timaru. The cables holding the Ben Venue parted and she turned broadside then capsized. The crew made for the City of Perth, but she too lost her anchors and ran aground beside the Ben Venue, and the crews took to lifeboats. All would have been well had the harbourmaster not headed for the City of Perth. Getting aboard, he realised the hopelessness of the situation, and some of his men launched a lifeboat. When it capsized 40 men were left struggling in mountainous seas. In all, three from the City of Perth and six shore hands died.