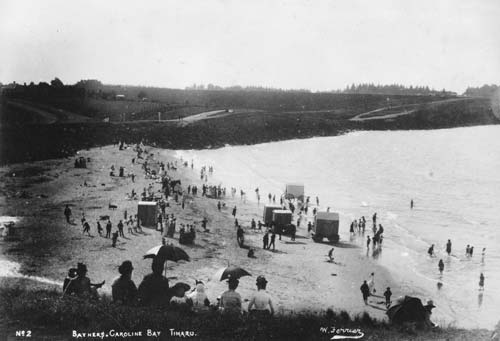 In the 19th century it was considered scandalous to reveal too much skin, and people usually swam in secluded spots. The beach was very public, so most people confined themselves to paddling in the shallow water. Those who wanted to swim either waited until no one was about, or used ‘bathing machines’ to get well out into the surf. This photograph of Caroline Bay, Timaru, about 1890, shows some bathing machines at the water’s edge. These would be towed out into the sea by horses, and then turned around to allow the bather to descend into the water from a ladder. An awning over the door would shield the bather until he or she was actually in the water.

Playing in the surf