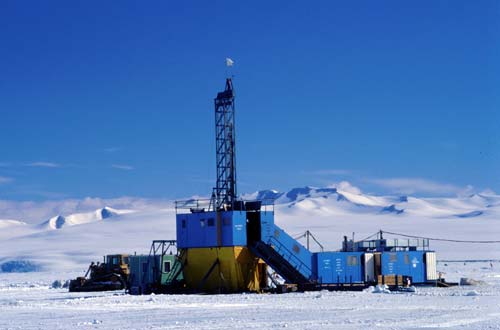 Glaciers hold information about past climatic and environmental change. As snow accumulates, layer upon layer, year after year, it gradually turns to ice. The deepest part of the ice in glaciers and ice sheets may have fallen as snow thousands of years ago, and the particles locked in it form a record of earth's atmosphere at the time. In addition to trapping compounds from the air, ice sheets trap a small sample of the air itself, providing information about the composition of the atmosphere at the time the ice formed. These scientists are drilling core samples in Antarctica.