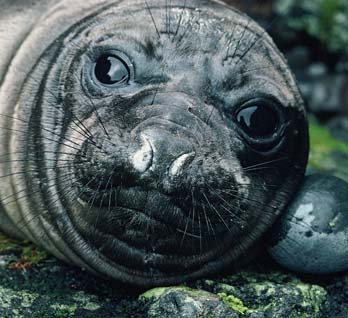 The story of New Zealand’s seals is the story of seals the world over – once numerous and widespread, they were hunted to near extinction, then protected, and are now making a recovery. At many sites around the coast, observant onlookers can watch these streamlined swimmers and divers in action.

Seals are mammals – they have fur, breathe air and spend time on land. But they are also superb swimmers and divers, and eat mainly fish and squid. Elephant seals can stay underwater without breathing for over an hour. Because of the way they evolved, they can live for weeks at sea, as well as on land.

From land to sea

About 25 million years ago, land animals similar to bears began to return to the sea, where all life began, and where there was plenty of food. These ancestors of seals evolved unique ways to survive when in water:

You can see fur seals sleeping, playing and swimming at Wellington’s Red Rocks, Kaikōura in the South Island, and other sites. But in the early 19th century, New Zealand’s seals had almost become extinct – they were hunted for their meat, fur and oil. A law was passed in 1875 to protect them, and now there are many colonies in New Zealand and its chilly subantarctic islands.

These seals have big dark eyes and small ears. They breed on beaches where there are large rocks for shade, and pools for cooling off. The males fight for territory, and smaller males often lose the battle. Females give birth to one pup each year.

The sea lions breed mainly on sandy beaches on the Auckland Islands. They have a blunt nose, and males have a mane of hair like a lion’s. Like fur seals, they have one pup each year. Many of the Auckland Island sea lions get caught in squid nets, and they are a threatened species.

These are the world’s largest seals. They have no visible ears, and a lot of blubber – a male can weigh 3,700 kilograms (as much as three cars), and sports an elephant-like trunk. New Zealand’s elephant seals breed on Campbell Island and the Antipodes Islands.