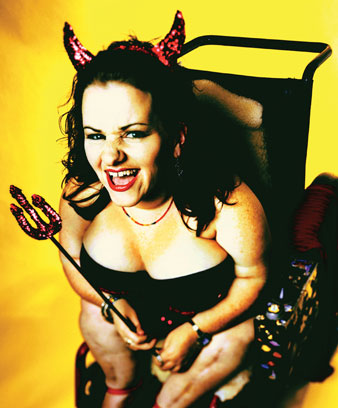 The sexual ‘double standard’ punished women much more than men for having sex outside marriage. Men were seen as entitled to sexual pleasure, but little attention was paid to women’s enjoyment of sex. In the 21st century it was accepted that a broader range of people were sexually active – including midlife and older people, gays, lesbians and bisexuals, and people with disabilities.

Te āhua nui: A photo from the exbibition 'Intimate encounters: disability and sexuality'

Down under the plum trees

Topp Twins and their partners, 2009

Traditional Māori society had a positive attitude to sexuality. Same-sex relationships were accepted, and people had several partners over their lifetimes. Children whose parents were not married were accepted into their mothers’ families.

European settlers brought ideals of monogamous heterosexual marriage. They opposed homosexuality, and children born outside marriage were defined as illegitimate. Some women’s groups opposed the ‘double standard’ which punished women much more than men for having sex outside marriage.

By the 2000s many earlier rules about sexuality had changed. Sex between men was decriminalised in 1986, and sex work in 2003. It was still illegal to have sex with someone who was under 16.

A 2012 survey found that around 50% of 17-year-olds had had sex. 58% of sexually active teenagers used contraception all the time to prevent pregnancy and 46% used condoms all the time to avoid sexually transmitted infections. New Zealand had a high teenage birth rate compared to other developed countries in the 2010s.

For many years there was little sex education in schools, and until 1989 it was illegal to talk to under-16-year-olds about contraception. In the 21st century sexuality education covered relationships and feelings as well as the physical aspects of sex.

Schools have often reinforced the idea that heterosexuality is normal and homosexuality is abnormal. Lesbian, gay and bisexual students have often felt that their sexuality was ignored in sexuality education, and some were bullied by other students.

In the past, there was a focus on men’s sexual pleasure, but little concern for women’s pleasure. This has changed over time. Sex has sometimes been narrowly defined as intercourse – but definitions have become broader.

Midlife and older people are sometimes seen as not being sexual – but sexuality is a lifelong experience. Research has found that many people enjoy sex more as they get older. They experiment with different ways of being intimate and experiencing sexual pleasure.