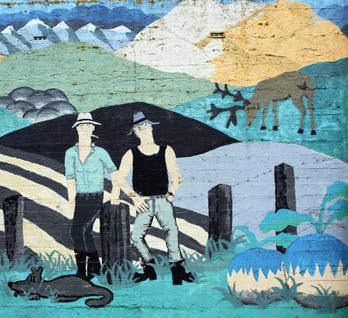 Southland is mainland New Zealand’s southernmost region, with the coldest lowland climate. Māori called it Murihiku, meaning ‘the last joint of the tail’.

At first, early Māori of the Waitaha tribe were based on the coast, living off seals, birds and eels. Later tribes to come to the region were Ngāti Māmoe and Ngāi Tahu, from further north.

Sealers and whalers arrived in the 1790s, and from the 1850s, immigrants from Britain started farming on the plains.

Half the population lives in Invercargill city, and Gore is the largest town. Other towns include Mataura, Winton, Bluff, Riverton and Te Anau.

Fiordland is New Zealand’s largest national park and has the highest annual rainfall (up to 7,500 millimetres). Its glacial mountains, valleys and lakes are home to unique insects, such as giant weevils and snails, and colourful moths. Indenting the coastline are its many fiords, or sounds – steep-sided sea inlets.

Few people live there, although thousands visit each year. Attractions include:

Southlanders are known for their friendliness. Popular events are the Bluff regatta and April oyster festival, the Easter races at Riverton and Tūātapere sports day. They are proud of their rugby team, the Southland Stags, and the Southern Sting (now Steel) netball team.

A strong Scottish and Presbyterian influence is the legacy of hard-working 19th-century immigrants. Southland is the only New Zealand region to have a distinct accent, with a softly rolled ‘r’.