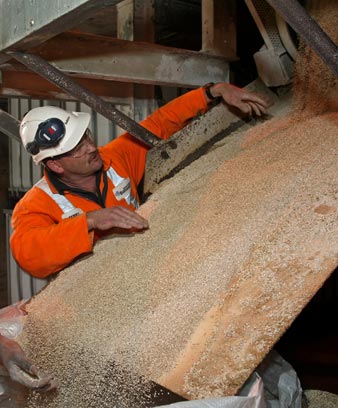 Known as ‘super’, it’s New Zealand’s premium fertiliser. Superphosphate first went on sale in England in 1843 – the very time when British farmers began settling in New Zealand. It proved ideal down under, especially for sheep and dairy pasture, and became a driving force in the growth of agriculture.

Superphosphate is a manufactured fertiliser, ideal for New Zealand soils. It contains nutrients that are quickly released when the granules are spread onto the soil. This boosts the growth of crops and pastures.

What is it made from?

The main ingredient is rock phosphate.This is a natural form of the element phosphorus, vital for life and present in all living cells. It is found in the fossils of sea creatures, and in bird droppings (guano). Over time these form a hard, sandy substance known as rock phosphate.

To make superphosphate, rock phosphate is mixed with manufactured sulfuric acid. The chemical reaction releases heat and steam – very unpleasant for the workers. The mixture becomes sticky, and is left to dry.

Today, two companies make superphosphate in New Zealand. Much of the rock phosphate comes via Morocco.

In the 1940s New Zealand developed aerial topdressing. Small aircraft flew low over hill-country farmland, dropping superphosphate over large areas. This was much quicker than spreading it by hand. Hill-country farming rapidly expanded.

Effects on the environment

Superphosphate cannot be used on certified organic farms because it contains artificial chemicals. Pasture seeds can be damaged by superphosphate. It may also make farm animals sick if they graze pasture before it has washed off into the soil.

Fine soil containing superphosphate can be carried into streams, where it may harm wildlife.